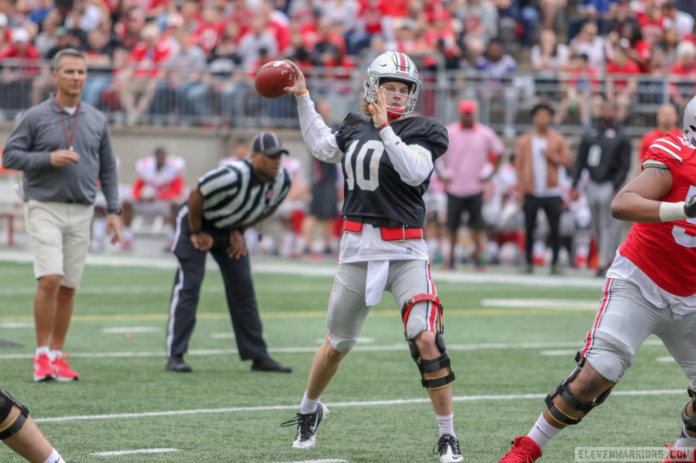 It’s obvious Joe Burrow has accomplished a lot during his first two seasons at the helm of a professional football team.
The Bengals’ QB is making his first Super Bowl appearance in just his second season, becoming the first No.1 pick to make the big game that early into his career. He led the NFL in yards per pass attempt (8.9) and completion percentage (70.4%) in 2021 and is already tied for the most playoff wins in franchise history with three.

He also set team records in the following categories: Single-season passing yards (4,611), passing TDs (34) single-game passing yards (525, Week 16 vs. Chiefs), playoff completions (75), and playoff passing yards (842).
And all of Burrow’s early success has some likening his accomplishments to those of another heralded signal-caller: Tom Brady.
Brady helped power his team to a Super Bowl title during his first season at the helm of the Pats, and Burrow has a chance to achieve the same feat with just one more year under his belt.

Naturally, the comparisons are pouring in, but do they have stable grounds for legitimacy?
Skip Bayless isn’t mad about it.

“I am OK with it,” Bayless said Wednesday on “Undisputed.”

“[That’s] because I guessed it. The next day after Brady got Cooper Kupp’d, I said the closest thing [to Brady] remaining in the playoffs is that kid in Cincinnati. I’m not saying he’s Brady, but he’s the closest. He’s no weight-room wonder.
“I’m talking about the poise, the command of the position, the gift for playing it. Because it takes poise to remain that cool under fire, to speed-read and find the most open receiver in two seconds, and deliver an above-velocity pass that almost catches you.”
Shannon Sharpe wasn’t buying it.

“At the same age (25), I believe Joe Burrow is better than Tom Brady,” he conceded.
“He was asked to do more and has a better compilation of receivers than Brady. [Brady’s first Super Bowl] team was built on defense: ‘Tom you don’t turn the ball over, you throw for 140 yards with no turnovers and a TD, we’re going to be great.'”
Sharpe suggested that another AFC quarterback is far more deserving of the comparison though.

“Patrick Mahomes has gone to four AFC Championships, he’s been to two Super Bowls, won an MVP, both regular season and Super Bowl. And we’re just going to forget all about him? Remember Dan Marino? His second year he went to a Super Bowl. How many did he go to after that? John Elway won his first Super Bowl in Year 15. It’s not easy, and a lot of times when you go, that might be your only opportunity to get there. We need to slow down. Brady has made it unfair for us to critique any other quarterback. He has more Super Bowls than any team!”
Burrow might have already stiffed his competition in the “cool department,” but many believe he still has tremendous ground to cover to earn Brady comps based on the field of play.
Winning a Super Bowl would be a monumental step in that direction.