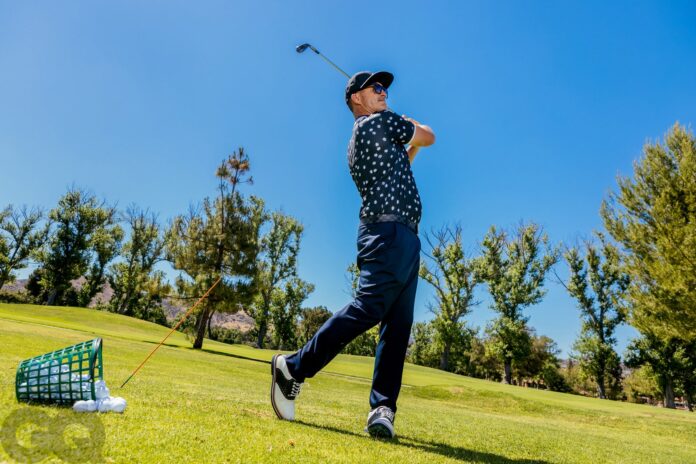 What is a golf swing? What is its purpose? There is no beginner’s luck in golf. Go out there with a club and a ball without preparation or instruction, and you will return defeated, angry, and without the ball.

They say that people who wait until adulthood to learn foreign languages never quite get the accent right; you either acquire it in the first plastic flush of childhood or not at all.

This is how I feel about my own golf game, which I started on the wrong side of 30: I may pick up the grammar and vocabulary. But I’ll never be a native speaker.

And yet, I’m obsessed like most golfers are. There is something irresistible about a game that puts perfection at such a far remove that you have infinite room to chase it.

My text chains come alive whenever the pros on TV top 3-woods into the ground, hook drives, or shank irons into the water: YES. Their ugly mistakes are testaments to the game’s untamable nature, proof of the fact that we all worship the same cruel god.

Into this yawning gap between what we aspire to be and what we come, a whole host of training aids, One Weird Tricks, and thousands upon thousands of YouTube and Instagram accounts purporting to teach the correct way to do things.

“There are so many different ways to swing,” says PGA Tour player Mathew Wolff, a Gankas protégé.

“And that’s George’s theory: There are so many different ways of doing it.” Go to your local basketball court; no shooting coaches are hanging around, waiting for clients. But go to the public range in your town.

You will see grown men with towels tucked under their arms and sticks at their feet and cameras pointed at their bodies, all in the hope of remedying the dizzying number of flaws that can afflict a golf swing: too steep, too narrow, too inside, too outside, too much sway, not enough sway, too stiff, too loose, too handsy, too artsy, too leggy.

It is simply a hard game, even before you look up from the ball and start registering the sand traps, water hazards, tricky greens, and swirling winds. To play it well is to feel in control of the entire universe; to play it badly is what happens the other 99 percent of the time.

And so the game is rife with trainers of varying philosophies and abilities: resort pros, former athletes tending to the range, Brits doing YouTube videos from gray British courses, and teachers at chains like GolfTEC, where you enter a windowless room and attach sensors to various parts of your body.

There are dynastic princes of the game, like Tiger Woods’s former coach Butch Harmon, himself the son of a Masters champion, or the now deceased Harvey Penick, whose Little Red Book will be received as a gift, at one time or another, by every golfer alive.

But just as most of the great golf courses in America are exclusive and closed to the public, most great teachers are out of reach: They work at private clubs or go on tour with players. George Gankas, however, is still at Westlake, beating up range balls and rubber mats. And you can still book a lesson, to fix what you cannot fix yourself.

READ:  What Are Fun Sports to Get Into-Sportsglob

Gankas got into golf to beat his father at it. He was 17, 18 at the time—incredibly late, by the usual pro sports standards. “I played a bad round with my dad,” Gankas said. “And he told me I was terrible.” The younger Gankas already excelled at wrestling, volleyball, waterskiing, baseball, and football. Still, his father, Frank, a P.E. teacher, and a bodybuilder, told his son that he’d never seen anybody so bad at golf. “I didn’t like sucking,” Gankas told me. “But that was my motivation: to beat my dad.”

Within two years, he was a plus handicap—better than scratch. (This is not normal or really even fathomable.) He did this by becoming a golf monk: 36 holes plus 500 to 1,000 balls on the range every day.

Did he have a life? No. Not at all. He had a spot at a junior college in Ventura, “which was a joke,” and played on the golf team until he transferred to Cal State Northridge, where he played in the early ’90s with Rick Sessinghaus, now teaches the promising young tour player Collin Morikawa.

“I remember him coming up to the first tee with his shirt untucked,” Sessinghaus said about Gankas. “Just not at all the typical golfer.”

Before long, Tiger Woods would begin his takeover of the sport. The best players in the world quickly moved from the pudgy, improvisational model of olden times into a more muscle-bound and professionalized mode, enabled in part by technological advances in the equipment. Like the various distinct local accents that are now fading from the world.